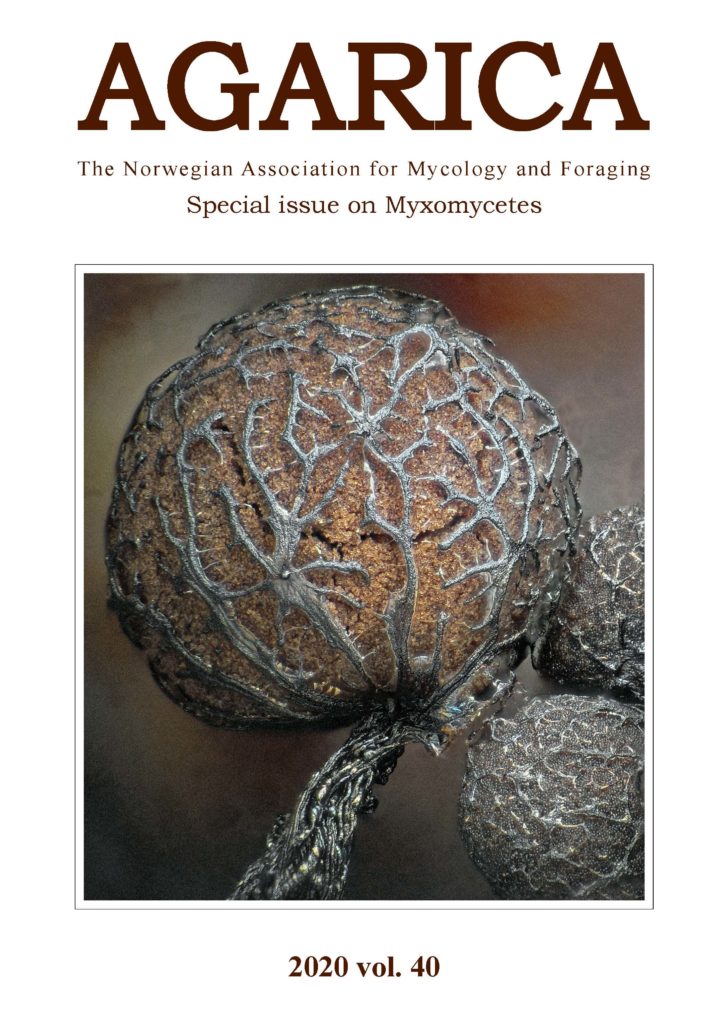 Agarica is a Mycological journal published by The Norwegian Association for Mycology and Foraging. Volume 40 (2020) is a special issue where Edvin Johannesen and Per Vetlesen present 130 myxomycete species and 8 varieties as new to Norway, and an additional 43 species previously reported from Norway, which are considered regionally rare. A complete checklist of Norwegian myxomycetes (363 species) is also presented.

Johannesen and Vetlesen have been working on this project for several years. Through this work, more than 100 species not previously known from the Nordic region, are now known from Norway. Several of these species have previously been reported from less than five countries worldwide.

The current understanding of the role and importance of the various myxomycete species in various biotopes is inadequate. Very few myxomycete species are red listed. The potential for further increasing the knowledge of the distribution and ecological significance of myxomycetes is considerable. This special issue will contribute to such knowledge and may furthermore stimulate the interest in, and the increased search for and mapping of myxomycetes among dedicated amateurs. This paper is also a source of information about deposited specimens of rare species and taxonomically difficult groups, which may contribute to the clarification or revision of such species or groups. Several specimens have already been provided for sequencing by researchers working on the revision of certain genera.

Collection details are provided for the vast majority of the reported species, along with key characteristics and distribution, including literature references from the Nordic-Baltic region. More than 500 specimens are marked as deposited in university collections.

The 363 species now known from Norway comprise about one third of all myxomycete species known worldwide (approx. 1000). For comparison, about 250 species have been reported from Sweden. This difference is mostly due to the enthusiasm and extensive collecting by a few persons in Norway in recent years, combined with active aid in the reliable identification of specimens.

Edvin Johannesen has a formal education in biology, specialising in mycology. He wrote his thesis on the myxomycetes of Norway in 1982 and has later written scientific papers and given lectures about myxomycetes.

Per Vetlesen has a formal education in forestry engineering and pedagogy. For 35 years he was teaching forestry and open air life at agriculture colleges. The last 10 years have been dedicated to the mapping and study of myxomycetes.

Do you want to contact the authors?  Use mail:  Edvin Johannesen (edvinwj@broadpark.no) or Per Vetlesen (pervetlesen@gmail.com)

Buy a digital copy in epub-format

Buy a digital copy in pdf-format

Please ask the authors for a review  or authors’ copy:  Edvin Johannesen or Per Vetlesen.